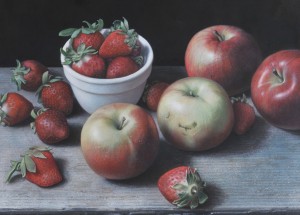 Doug Safranek received a B.A. in French from Boston College and an M.F.A. from the University of Wisconsin where he studied with Robert Grilley, magic realist John Wilde, and art historian James Watrous who introduced him to egg tempera painting. His work is included in numerous private and public collections, including the Arkansas Art Center, the Norton Museum of Art, the New-York Historical Society, the Museum of the City of New York, and the Metropolitan Museum of Art. Over the course of his thirty-year career, he has received a number of awards and honors, including an Elizabeth Greenshield’s Grant, a solo exhibition at the Butler Institute of American Art, and a Gold Medal from the Allied Artists of America. Mr. Safranek is represented by ACA Galleries in New York City.