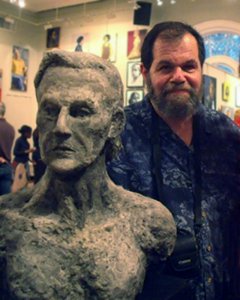 Hillard “Hilly” Schneider with his sculpture in the League’s Phyllis Harriman Mason gallery.

A gifted student of sculpture, he worked and studied at the Art Students League of New York with instructors Barney Hodes and Jonathan Shahn.  He received both his Bachelor’s and Master’s degrees from Brooklyn College. He was also the dear friend of and co-editor with the late Alan Betrock of Shake Books.

An enthusiast of creature comforts and air conditioning, he declared, “The outdoors is over-rated” – exemplifying his striking wit and outrageous sense of humor.

Contributions in Hilly’s memory may be made to The Art Students League’s Hillard Schneider Scholarship fund.