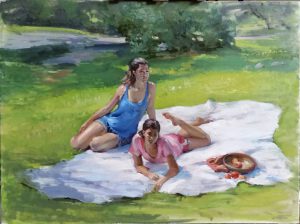 John A. Varriano has been a respected and award-winning representational artist for over 25 years. As an artist and instructor, John focuses on how to carefully observe nature and expressively translate the language of light into the language of paint. He studied at The Art Students League of New York with Frank Mason and Gustave Rehberger. His numerous awards include the 2016 AAPL Alden Bryan Memorial Award for Traditional Landscape and the 2015 Allied Artists of America ‘Florence and Ernest Thorne Memorial Award’ for his portrait work. He has been featured in numerous publications such as Fine Art Connoisseur and was profiled in a November 2017 issue of Plein Air Magazine.

John served on the Board of Directors of The Art Students League for several years and was President in 2005 and 2006. He currently serves as a trustee for Artists’ Fellowship. John is a member of the Salmugundi Club, the Portrait Society of America and the Allied Artists of America, and previously served as a board member of the Hudson Valley Art Association.

John is an instructor of painting and drawing at The Art Students League of New York and The Woodstock School of Art. He teaches landscape painting, figure drawing and prismatic palette workshops in New York and New Jersey.  John’s portrait commissions are in numerous private and public collections, including the Yale Club in NYC.  He is represented by Mark Gruber Gallery in New Paltz, NY and Lockwood Gallery in Kingston, NY.