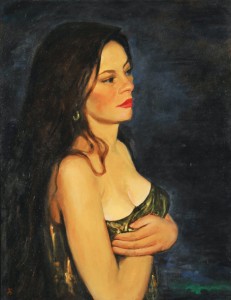 Since the dawn of civilization, man has always sought to express his interior artistic nature, which continues to this day. Technical advances and inventions threaten and have threatened to eliminate it, but art and artistic works continue to flourish. Whether you are doing computer art, photography, sculpture, or painting, a knowledge of and practicing of drawing and painting will help you become better in your endeavors. To this end, Mr. Faragasso has been teaching students of all levels the time-honored principles of realistically drawing and painting nature since 1968 at the Art Students League.

“One must learn how to see, how to think, and how to do. Seeing is different than looking, for much of what we look at is illusionary. One must be made aware of these illusions and learn to see and paint nature correctly. This is accomplished with a completely related system where every aspect of drawing and painting is revealed and taught.”

Mr. Faragasso studied at the Art Students League and at its Woodstock summer school with the late Frank Reilly, with whom he learned how to paint landscapes and the figure outdoors. Later, he went to Europe to study the Old Masters. Upon returning, he commenced a successful career as a fine artist, illustrator, art instructor, and writer. His illustrations have appeared on thousands of paperback covers throughout the country and overseas. For more than a decade, he has concentrated solely on the fine arts, teaching, and writing.

He has exhibited in numerous galleries in Scottsdale, Arizona; New York City; and Woodstock, New York. His paintings are in numerous public and private collections, including those of Clare Booth Luce; financier James Rogers; Charles Osgood; the National Museum of American Art in Newport, Rhode Island; and the Museum of the Tuskegee Institute of Alabama. He is listed in A Biographical Dictionary of Science Fiction and Fantasy Artists, as well as many Who’s Who in American Art publications. Mr. Faragasso’s book The Students’ Guide to Painting was published by the North Light Publishing Co. in 1980, and became a bestseller. His book Mastering Drawing the Human Figure from Life, Memory, Imagination complements the book on painting. His most recent book is titled The Early Photographs of Bettie Page, The Making of An American Icon.

Mr. Faragasso was director and instructor at Frank J. Reilly’s School of Art in 1967. He has also taught at the Woodstock School of Art and the Scottsdale Artists’ School of Arizona. He is a member of Artists’ Fellowship, the American Society of Portrait Painters, and is the subject and author of numerous articles on artistic matters.