The Art Students League of New York is pleased to present Two Generations of Women Printmakers: Atelier 17 and The Art Students League guest curated by independent scholar Dr. Christina Weyl and on view November 4 – December 5, 2021. What could the venerable Art Students League of New York, founded in 1875, possibly have in common with the avant-garde printmaking studio Atelier 17, formed in the late 1920s in interwar Paris? This exhibition suggests that these two important artistic centers are more intertwined than previously known and that together they produced some of the most accomplished female printmakers of the twentieth century.

Atelier 17’s founder, Stanley William Hayter (1901-1988), took his first printmaking lessons in 1926 from Mary Huntoon (1896-1970), who had spent several years mastering the graphic arts at The Art Students League of New York. Huntoon’s instruction carried forward the pedagogy of her own teacher, Joseph Pennell (1857-1926), who had established a rigorous program at The League whereby his students executed all aspects of the printmaking process themselves and were encouraged to test new technical approaches. From the outset, Hayter also emphasized technical proficiency and experimentation at Atelier 17, which he founded only a few years after his study with Huntoon. Over its history spanning six decades and several locations in Paris and New York City, Atelier 17 remained closely connected with The League’s instructors and its student body.

Through a display featuring twenty-four artists, Two Generations of Women Printmakers demonstrates three major points of connection between The League and Atelier 17.

Joseph Pennell at the press. Archives of The Art Students League

First, the exhibition takes Joseph Pennell’s classroom (1922-1926) as its starting point to illustrate how women traversed offerings at both institutions. The League was often a feeder of great artists to Atelier 17, particularly during Atelier 17’s years in New York City between 1940 and 1955.

Second, the high level of accomplishment seen in the exhibited prints proves that the egalitarian conditions within each institution’s printmaking studios enabled women to master the skills necessary to execute all steps in the printmaking process. While some women leveraged their newfound proficiency to become instructors of printmaking or open their own studios, others found printmaking inspired creative pathways that impacted their work as painters or sculptors. Carving lines into a metal plate or woodblock inspired the sculptural ambitions of artists such as Louise Nevelson, Dorothy Dehner, Worden Day, and Louise Bourgeois. 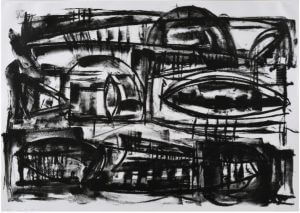 Third, the show traces the networks of sisterhood that these women built at The League—in classrooms and at social events—and at Atelier 17. These relationships, both personal and professional, helped artists advance their careers in an art world that was frequently less supportive of entrepreneurial women. The final gallery space features prints and sculpture by Louise Nevelson and Dorothy Dehner, who met at Atelier 17. Their lifelong friendship advanced professional opportunities, such as when Nevelson recommended Dehner to make lithographs at the Tamarind Institute.

Although the stories of women artists at these two venerable institutions are too extensive to capture in one show, this selection spotlights the rich possibilities that printmaking presented to women across two generations of artists.

Dr. Christina Weyl is an independent scholar and curator with expertise on twentieth-century American printmaking. She received her BA from Georgetown University (2005) and completed her MA and PhD in art history at Rutgers University (2012, 2015). Her recent book, The Women of Atelier 17: Modernist Printmaking in Midcentury New York (Yale University Press, 2019), which grew from her dissertation, highlights the nearly 100 women artists who advanced modernism and feminism at Atelier 17, the avant-garde printmaking studio located in New York City between 1940 and 1955. In addition to the present show, she is currently curating an exhibition for the International Print Center of New York focusing on Margaret Lowengrund and her pioneering effort to establish The Contemporaries as a hybrid printmaking workshop/gallery. She has published in Art in Print, Print Quarterly, and Archives of American Art Journal and contributed to several anthologies and exhibition catalogues. From 2014-2018, she served as Co-President of the Association of Print Scholars, a non-profit professional organization she co-founded in 2014. Prior to her graduate studies, she worked for IFPDA member Gemini G.E.L. at Joni Moisant Weyl, which representing the publications of the Los Angeles–based artists’ workshop Gemini G.E.L.