Ephraim Rubenstein received his B.A. in art history from Columbia University and his M.F.A. in painting from Columbia University’s School of the Arts. Mr. Rubenstein has had eleven one-person exhibitions in New York, at Tibor de Nagy Gallery, Tatistcheff & Co., and most recently at George Billis Gallery in Chelsea. He has also exhibited at the Butler Institute of American Art, the Virginia Museum of Fine Arts, and the National Academy of Design, where he won the Emil Carlsen and Beatrice Laufman Awards. His work is represented in numerous public and private collections, including the Metropolitan Museum of Art.

Mr. Rubenstein is an active teacher as well. From 1987 to 1998, he was associate professor of art at the University of Richmond, where he received the Distinguished Educator Award and the Outstanding Faculty Award from the Commonwealth of Virginia. He has taught at the Rhode Island School of Design and the Maryland Institute College of Art, and he is currently on the faculty at Columbia University as well as at The Art Students League.

To learn more about Mr. Rubenstein and his work, visit: www.ephraimrubenstein.com. 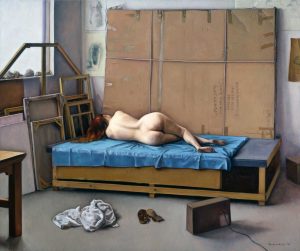 This lecture was filmed before a live audience in the League’s Phyllis Harriman Mason Gallery on February 23, 2017.

This lecture was filmed before a live audience in the League’s Phyllis Harriman Mason Gallery on February 28, 2019.